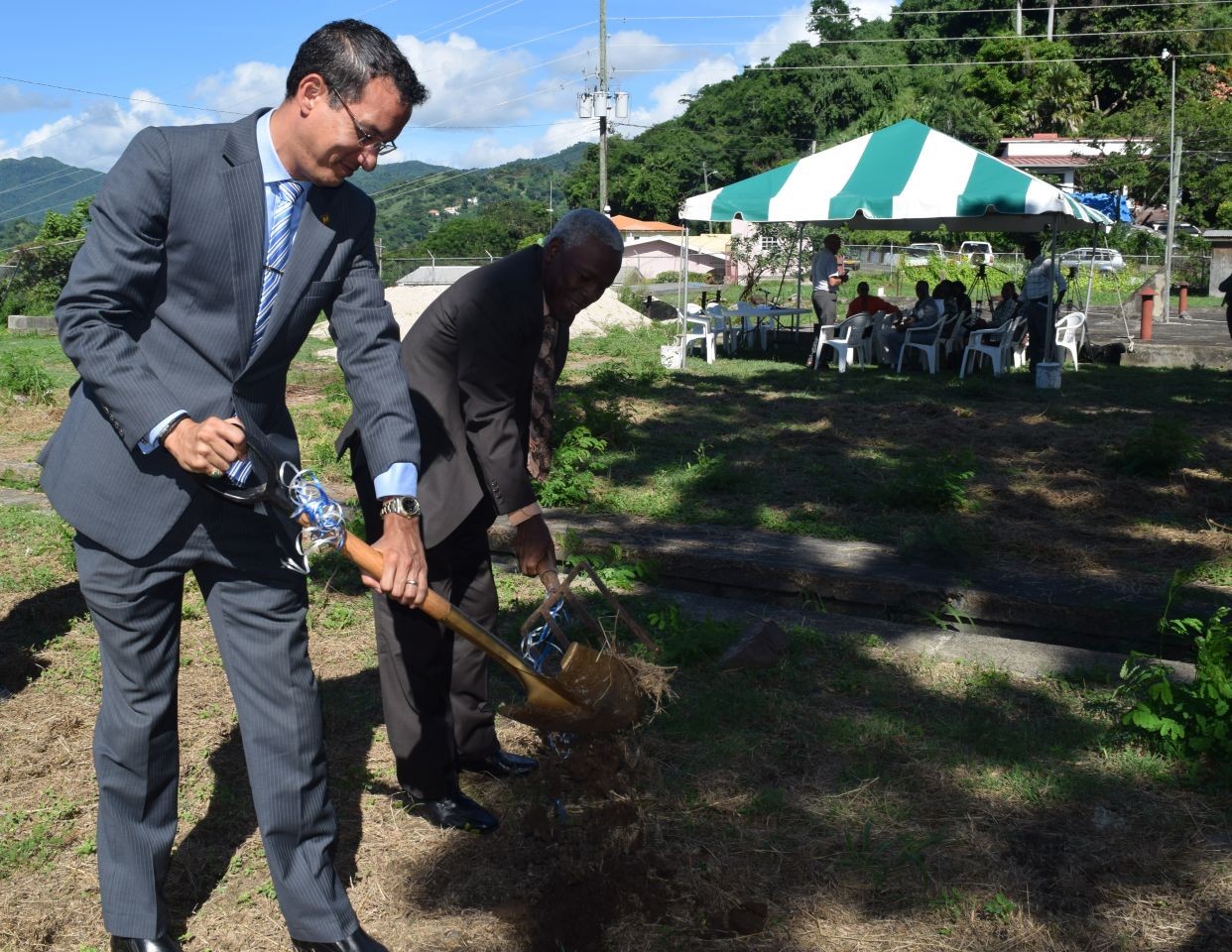 St. George, Grenada: " We are at a point that I have been looking forward to for a very long time" the words of NAWASA's General Manager Mr. Christopher Husbands as he addressed persons at the Sod Turning Ceremony for the Chemin Valley Water System on Tuesday October 21st, 2014.

For over 40 years, the Chemin Valley residents and its surrounding environs have had to deal with no water supply on occasions during power outage and also system maintenance.

The Chemin Valley Borehole was constructed in 1965 and is the only practical source of potable water for the communities of Confer, Marian and Close Rock which are residential areas and Egmont and Golden Heights which are considered as residential developments.
This Chemin Valley Water System Project involves the procurement of tank, pumps and telemetric switching devices, reinforced concrete tank base and also the installation of approximately 2 km of 200mm ductile iron pipeline, glass fused tank, borehole pumps, fencing to site and test and commission system.

According to General Manager Mr. Christopher Husbands "This project provides for NAWASA the ability to improve its energy efficiency as Chemin Valley is the only system that NAWASA pumps directly into customers' pipelines. This has been inefficient and very expensive considering the cost of electricity. This project was one of priority for NAWASA because it allows us the ability of scheduled pumping from one point to another, significantly reducing pumping costs, as persons will now receive this supply by gravity."

"This project also provides the benefit for NAWASA in that persons served by borehole have a preference for surface water which up until now NAWASA has not been able to influence via treatment. This new reservoir allows NAWASA to invest in other treatment additives that can address the taste concerns." the GM further added.

Parliamentary Representative for St. David Hon. Oliver Joseph says this project is all part of Government's five (5) year development plan for the parish's infrastructure. "As a Government, we have pledged to improve the lives of the citizens of this tri – island state, water is fundamental. Everyone will agree that without water you are limited to what you can do. I am very happy because I know the community will be served well by his project. Jobs will be created, another important aspect of this project."

Minister Joseph and Minister of Public Utilities Hon. Gregory Bowen turned the sod. Minister Bowen said "We are very happy that significant complaints of water shortages will be addressed by this project. The Disaster Vulnerability Reduction Project is of significant importance as it helps with disaster vulnerability while bringing improved water supply to various communities."

Following the Sod Turning at Chemin Valley, teams journeyed to Observatory to the site where a hundred thousand (400,000) gallons glass fused steel bolted tank will be constructed as part of the Observatory Reservoir Installation Project.

The project aims to ensure that the town of St. George will not continue to experience a depleted water supply during working hours. This reservoir will adequately supply water to the town of St. George for a maximum of two (2) days in the event of water shortage. It involves the excavation and laying of foundation and base slab to receive 400,000 gal glass fused steel bolted tank, the installation of eight inch (8") transmission line (200ft.) from the Annandale line to the new reservoir, eight inch (8") bulk meter on the transmission line, and new six inch (6") line from new reservoir to hook-up into existing six inch (6") line.

Parliamentary Representative for the Town of St. George Hon. Nicholas Steele and Minister of Public Utilities Hon. Gregory Bowen, turned the sod for this project.

Farmex has been awarded the 5.4 million dollar project – Chemin Valley at $3.8M and Observatory Tank Reservoir – 1.6 million EC Dollars. Both projects are funded by the Government of Grenada and the World Bank as part of its Disaster Vulnerability Reduction Programme.
END