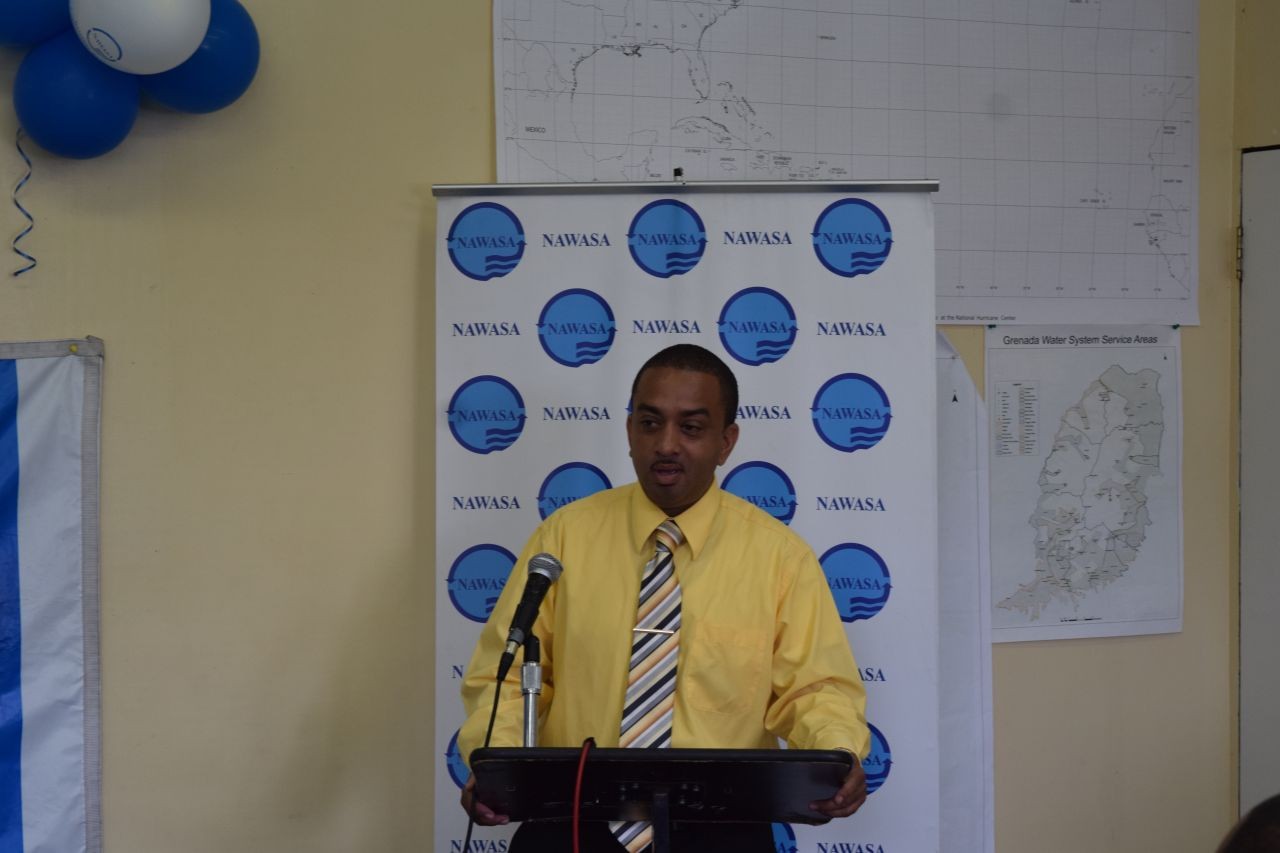 The intimate gathering was nothing short of spectacular as attendees were provided with information on activities organized by the Authority in observance of World Water Day which is celebrated globally on Sunday March 22nd, 2015.

The Welcome Remarks was done by General Manager Mr. Christopher Husbands who implored on participants to understand the importance of water sustainability. “This year’s theme Water and Sustainable Development re-emphasises the fact that water is a scarce resource and needs to be managed effectively. NAWASA has been encouraging persons to practice water storage which is only one aspect of sustainability, but an important one at that. We have always recognized that students are agents of change in their own way, get them on board and you have information sharing for life. We are happy that our activities target schools specifically and will add value to Grenada’s education system in 2015 and beyond” he stated.

Most activities planned by the Authority revolve around the nation’s schools with specific focus on Water Storage and Rain Water Harvesting. The Ministry of Education & Human Resource Development endorsed the programmes. Mrs. Merryl Lord, Education Officer with responsibility for District 4 represented the Ministry at today’s launch. Her presentation was timely “Ensuring that water is sustainable is a difficult task, but one in which our children play a major role. Teaching them the importance of water now and encouraging them to practice what they are taught will no doubt pave the water availability in the future. We at the Ministry of Education is happy to support this thrust by NAWASA and applauds the team for their efforts at involving the nation’s students in their activities.”

The Authority’s 2015 activities received major financial support from GIZ, a German based organization that focuses on climate change adaptation. The Head of the German – Grenadian Pilot Programme Mr. Dieter Rothenberger said “As an organisation that prioritises climate change adaptation and water as a renewable resource, we are absolutely delighted to provide support to NAWASA.”

NAWASA’s Communications Officer Jamila Lewis, made a full presentation on the activities organized by the Authority giving high accolade to a project that she described as “very dear to their heart” - a community based initiative called Tap Close – School Open. “No more will a school in Grenada, Carriacou & Petite Martinique has to close their door because of the lack of water. NAWASA and its partners will ensure that all schools in the tri – island state have functional storage facilities by September of this year. Education is a right…and so too is clean potable water, at all times in our schools.”

NAWASA Water Warz, Pre-Primary and Primary School Jingle Competition are other activities that target the nation’s schools. The registration period for all activities is now officially opened and schools can access the Authority’s website and Social Media platform for more information and registration forms.

For domestic & commercial customers, the popular Free Reconnection Programmes which involves waiving the reconnection fee will take place for one day only – Thursday April 2nd, 2015 subject to a number of terms and conditions.

Activities for World Water Day will span a period of six months culminating in the month of September when the United Nations celebrates International Water Week.