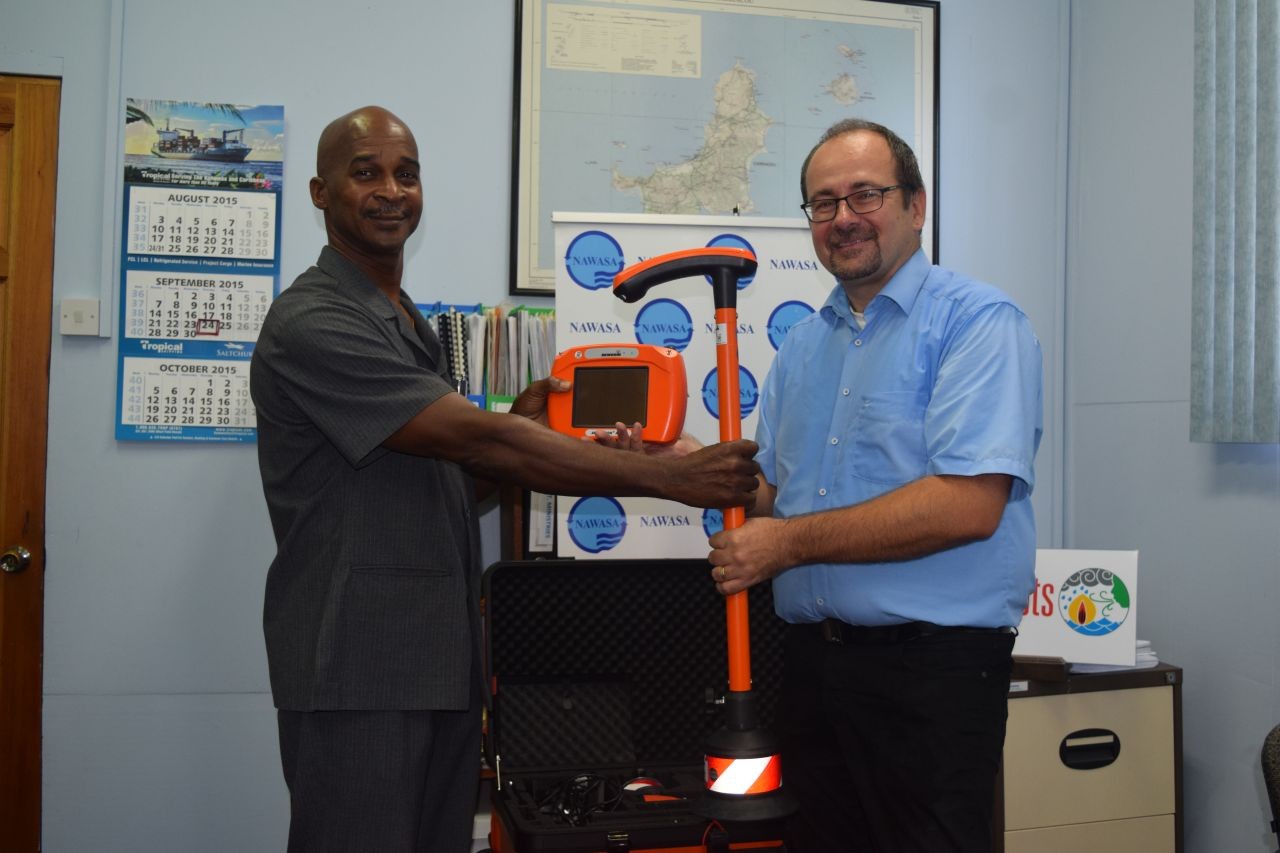 Thursday September 24, 2015, St. George’s, Grenada: Three leak detection equipment in the value of EC 50,000.00 dollars were officially handed over to the Authority on Thursday September 24th, 2015, the generous gift of the German Agency for International Cooperation GIZ under its ICCAS Programme.

The equipment was handed over by the Head of GIZ in Grenada Mr. Dieter Rothenberger and received by Mr. Joel Thomas, Manager of NAWASA’s Transmission and Distribution Department under which the leak detection Unit falls.

The equipment will enable the Authority to identify leaks along its distribution network. The hand over of these equipment followed threee days of theoretical and practical field training.Twenty (20) employees participated in this from Tuesday September 22nd to 24th, 2015.

The workshop was aimed at enhancing the knowledge of technical staff working on network issues for pipe and cable location, leak detection, data loggers trading and assessment of data.

Leak Detection is best described as a proactive strategy to reduce water loss by the detection of invisible leaks using specialized equipment followed by the prompt repair of leaks.

The history of NAWASA's Leak Detection Programme has its inception during the 1980's during the Central Water Commission. Leak detection exercises were conducted for a limited period and were not thorough enough to conclude on a percentage of non-revenue water (NRW).

The re-emergence of the Leak Detection Programme came with the implementation component of the Southern Grenada Water Supply Project, which saw the rehabilitation of six (6) Treatment plants (Annandale, Mardi Gras, Les Avocats, Windsor Forest, Petit Etang and Mamma Cannes) during the period 02 June 2009, and 01 December 2010.

There are a number of benefits to NAWASA’s Leak Detection Programme.

Over the years, the Authority's Leak Detection Unit can attest to accurate location and speedy repairs of leaking water pipes in its supply system, thus, reducing water loss or NRW by approximately 10-15%. Because the leaks are found with great accuracy, the Authority has seen significant reduction in the costs associated with road reinstatement.

The training was conducted by Mr. Michael Kersting, Business Development Manager from Sewerin. The workshop was held at NAWASA's Conference Facility at Dusty Highway.